It’s 2:45 on a Wednesday afternoon, and that means school is out at Highland Elementary in Sanford, NC. But not all of the students are hopping on buses or heading to the carpool line. In the school’s auditorium, students are filing in, putting their book bags in designated bins against the wall and settling into the center of the floor for the daily Devotion and Prayer. This is how the Fort Bragg Armed Services YMCA Before School/After School program begins each morning and afternoon. And from 5:45 a.m. until 6:45 p.m. “Ms. Vera” is there to make sure that the children get all the care, guidance and encouragement they need.

Vera Davis is the Site Director for the Before and After School Program at Highland Elementary School in Sanford, NC.

Vera Davis is the Site Director at Highland Elementary, where she provides child care to 67 Highland students who are children of military personnel and employees at Fort Bragg. When speaking with the children and parents who depend on this program, it becomes apparent that this is not your typical child care situation.

As CPT Ted Kuchta, who has been stationed at Fort Bragg for the past four years, puts it, “I am super picky about who watches my child, but the interaction and engagement that occurs here is amazing…the children love Ms. Vera.”

The hours of the program are also particularly well-suited for military families, whose schedules often don’t mesh with those of traditional childcare providers. Just ask Staff Sgt. Kathy Genevia, a single mother of two who has also been stationed at Fort Bragg for the past four years.

“There are days when PT [Physical Training] starts at 6:30 a.m. or we may have a class that runs long in the evening,” she said.

In addition to the flexible schedule the program provides, the parents also find that it helps their children to make productive use of before- and after-school time, which in turn allows them to have more meaningful time as a family when they get home.

Nine-year-old Leanna Genevia says the after-school program is a quiet place to do homework, which makes time at home more fun.

Spc. Nick Booth, who was recently transferred to Fort Bragg, said he notices a huge difference since his son joined the program.

“Family time in the evenings is better now,” he said. “We’re not just trying to get all the homework done. Instead we review what he has already finished and we have plenty of time to talk and play, too.”

Ms. Vera doesn’t mind the long hours each day, because she recognizes that through her work she is able to “make a difference in someone’s life.”

Vera Davis, now 61 with two daughters and two grandsons, was born and raised in the Netherlands. Her parents had moved there from Indonesia, and she remained there until meeting her husband who was in the U.S. Air Force. They moved from the Netherlands to Louisiana to Germany before finally being stationed at Pope Air Force Base and remaining in the Fayetteville area when her husband retired.

Ms. Vera has been working with children for the past 21 years and has been with the Fort Bragg Armed Services YMCA since 2002. She started the before and after school program at Highland three years ago and hopes to see it expand in the coming years. Ms. Vera says the program provides many advantages for military families over traditional child care situations. For instance, the program is on-site so there is no transportation, which gives parents peace of mind during the afternoons. Additionally, she notes that the fact that the program is run by the Fort Bragg ASYMCA gives military families a sense of comfort and community from day one.

As Ms. Vera put is, “The program is just one big family…kids, parents, and counselors.”

Parent Kathy Genevia agrees. She has been impressed with the care and follow-up from Ms. Vera. “She texts, emails…she’s very informative and makes sure to check up on the kids,” she said.

As much as Ms. Vera is loved and respected by the parents, her biggest fans are the 67 children in the program. Whether the kids are coming in or going home, they are quick to share a hug with Ms. Vera or tell her about their day. When asked to describe Ms. Vera, 8-year-old Logan’s eyes light up and he quickly offers his thoughts.

“She is great! And nice! And very funny!”

Seven-year-old Keenan explained that he had completed two drawings the day before. “When I showed them to Ms. Vera she said that they were amazing and that I would be an artist one day.”

It’s impossible to watch the daily interaction between Ms. Vera and the children and not leave with a Grin on your face.

However, it is also very noticeable that there are things about the program that can be improved, and unfortunately these are beyond Ms. Vera’s control. Her arts and crafts supplies are very limited and she often has to get creative to come up with ideas for art time; The games, books and school supplies on hand are old or in short supply; and perhaps the most glaring issue is the lack of computers and internet capability. This is a major problem when the children are trying to complete homework, because many of the older students require the use of a computer and an internet connection to finish their assignments.

But there is good news! Grins has worked with the Fort Bragg Armed Services YMCA and Ms. Vera to come up with a comprehensive list of supplies that will help continue making this program even better! And we can all be a part of the process. The Fort Bragg ASYMCA has created an option on their website where people can donate directly to the Before School/After School Program, and from now until the end of the year, Grins will match any donation that is made.

The families that I had the privilege of meeting at Highland Elementary are kind, tough, and resilient and sacrifice so much to do the important work of protecting our country. This is a chance for us to give something back to them in a meaningful and tangible way, and more importantly it is a chance to help some amazing kids and the amazing woman who helps them each day. Please visit https://www.asymca.org/fort-bragg-nc/get-involved/donate and designate your gift to “Before & After School Program.”

Grins Person of the Month: Langston Peoples (The Food Dude)

We have all had that moment where we hear a statistic on the news and cringe. Across the world and even in our own backyards, there are unfortunate truths that, when brought to light, evoke feelings of compassion and a desire to serve. Most of us however, are unable to turn these feelings into action. We are paralyzed by the scale of the situation, and we think that the world’s problems are too big for one person to solve.

Thankfully, there are individuals who seize such opportunities and are determined to make a difference. Eleven-year-old Langston Peoples is one of these individuals. So when Langston learned that 1 in 4 kids in his hometown of Winston-Salem were in danger of going hungry, he immediately wanted to find a way to help. “I was thinking about what my Grandfather Thata says a lot. He says, ‘There is always someone who needs our help. It is our task in life to find a way to help.’”

With his Grandfather’s words playing in his mind, Langston began brainstorming with his mom, Sahana Peoples, about ways he could help. Pretty soon, Langston was putting his thoughts into action. He set up a neighborhood food collection program to benefit the Second Harvest Food Bank of Northwest NC, and now has the designation of Block Captain. Block Captains are essential to the Second Harvest Food Bank, because it is their consistent, year-round effort that helps avoid shortages.

I am lucky enough to be one of Langston’s neighbors, so I have seen him in action for well over a year now. The neighborhood knows him now as the Food Dude, a nickname he uses in his monthly reminders. Langston coordinates monthly pick-ups in our neighborhood. To date, he has collected 2,379 pounds of food! But Langston has not stopped there. In addition to collecting monthly donations for the Food Bank, Langston also saw a need at Vienna Elementary School, where he is a 5th grade student. Langston learned that some of his fellow students were at risk of going hungry when they were not in school. So Langston coordinated additional food pick-ups, requesting items that were specifically intended to go into the “Weekend Backpacks”, which are packed with food and sent home with the kids who need them each Friday. 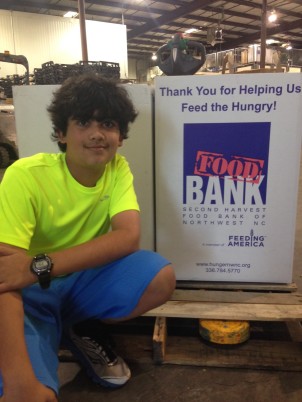 Since December 2012, Langston has collected 2379 pounds of food for the Second Harvest Food Bank of Northwest NC!

Langston “The Food Dude” Peoples has made an incredible impact in a very short period of time, and his passion and dedication to service suggest that this is just the beginning. It’s people like Langston that make us all grin, and that is why he is the Grins Person of the Month!