Grins Person of the Month: Langston Peoples (The Food Dude)

We have all had that moment where we hear a statistic on the news and cringe. Across the world and even in our own backyards, there are unfortunate truths that, when brought to light, evoke feelings of compassion and a desire to serve. Most of us however, are unable to turn these feelings into action. We are paralyzed by the scale of the situation, and we think that the world’s problems are too big for one person to solve.

Thankfully, there are individuals who seize such opportunities and are determined to make a difference. Eleven-year-old Langston Peoples is one of these individuals. So when Langston learned that 1 in 4 kids in his hometown of Winston-Salem were in danger of going hungry, he immediately wanted to find a way to help. “I was thinking about what my Grandfather Thata says a lot. He says, ‘There is always someone who needs our help. It is our task in life to find a way to help.’”

With his Grandfather’s words playing in his mind, Langston began brainstorming with his mom, Sahana Peoples, about ways he could help. Pretty soon, Langston was putting his thoughts into action. He set up a neighborhood food collection program to benefit the Second Harvest Food Bank of Northwest NC, and now has the designation of Block Captain. Block Captains are essential to the Second Harvest Food Bank, because it is their consistent, year-round effort that helps avoid shortages.

I am lucky enough to be one of Langston’s neighbors, so I have seen him in action for well over a year now. The neighborhood knows him now as the Food Dude, a nickname he uses in his monthly reminders. Langston coordinates monthly pick-ups in our neighborhood. To date, he has collected 2,379 pounds of food! But Langston has not stopped there. In addition to collecting monthly donations for the Food Bank, Langston also saw a need at Vienna Elementary School, where he is a 5th grade student. Langston learned that some of his fellow students were at risk of going hungry when they were not in school. So Langston coordinated additional food pick-ups, requesting items that were specifically intended to go into the “Weekend Backpacks”, which are packed with food and sent home with the kids who need them each Friday.

Since December 2012, Langston has collected 2379 pounds of food for the Second Harvest Food Bank of Northwest NC!

Langston “The Food Dude” Peoples has made an incredible impact in a very short period of time, and his passion and dedication to service suggest that this is just the beginning. It’s people like Langston that make us all grin, and that is why he is the Grins Person of the Month!

Lessons From a Marathon

Running a small business teaches you a lot about the importance of persistence and optimism. You need to show up every day and get it done, whatever “it” may be. Each little step is important to achieving the end result, but that end result may not show up for weeks, months, or years. That’s why optimism is critical. You have to believe in what you’re doing, or you’ll be very tempted to throw in the towel before you reach the finish line.

I’d say all of that applies to something I did in my off-work hours this past Sunday. I ran my first marathon. Now I didn’t do this on a whim or anything, I have run a few half marathons before, and I trained for about 12 weeks leading up to the race with a goal of running under 3 hours and 5 minutes (the time needed to qualify for the Boston Marathon). On Sunday morning my wife Kaitlin and I woke up early and made our way to the race for the 7am start. I felt great. My training had gone well, I had avoided injury, and now all I had to do was go out there and, as Kaitlin said, “finish it.” Over the next 3 hours 12 minutes and 11 seconds (spoiler alert, I didn’t qualify) I learned a few things:

This sounds obvious and of course I knew the length going in, but there is a HUGE difference between 18 miles (or 20 miles or even 22 miles) and 26.2. I had been warned by others that the marathon was a different animal, but my longest training run was 22 miles and I did not think another 4.2 would do me in. Boy was I mistaken!

As someone who has run a number of races of varying lengths, I know better than to expend too much energy early on, so I was committed to not overextending myself early in the race…then the gun went off. I was cruising through the first few miles like they were nothing and I ended up running the fastest half marathon of my life. One problem: I had to run another! By the time I hit mile 15 I started to fade and when I got to miles 18-19 I knew I was in trouble! 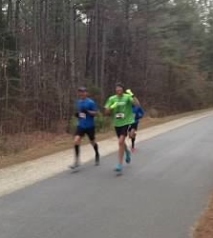 The course for my marathon was on the American Tobacco Trail, which is very wooded and secluded. This means that it is not a spectator friendly event, but Kaitlin and our friends Kristin and Derrek were up for the challenge. They drove to different remote points on the course where they waited with some great signs that helped keep my morale up and my thoughts positive. Every possible source of encouragement and motivation is important during a marathon and their efforts certainly helped carry me through the middle miles. 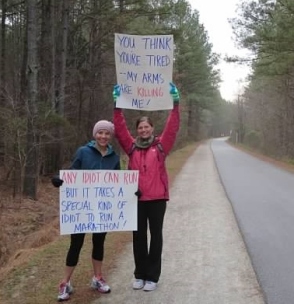 “…It takes a special kind of idiot to run a marathon.”

As I mentioned before, I really hit the wall around 19 miles. My legs just weren’t responding and my energy level was dwindling. I was hoping for a second wind, but I could tell it wasn’t coming. To make matters worse, miles 20-22 were a continuous incline. So by the time I was on my last 4 miles, I was completely spent. There was a moment when I thought that finishing may not be in the cards, but I kept thinking about Kaitlin’s words, “finish it”, and I decided that the only way I would stop running was if I collapsed. By mile 25 I felt like I was crawling and looking back at the splits on my watch I saw that it was in fact my slowest at 9:20, which is a far cry from the 6:45 miles that I averaged for the first 13. But looking back at it, mile 25 was probably the best mile I ever ran. I can barely remember it, but the effort that it took to run that mile far exceeded any in the thousands of miles I had run prior. I will always be proud of that 9:20 mile.

As much as a marathon may be a personal achievement, in my experience it was certainly a team effort. Kaitlin encouraged me throughout my training, and pushed me out the door to run many Saturday mornings when my motivation was lacking. She was also there with me at the end. As I approached the last half mile of the race I saw Kaitlin cheering me on, and I asked her to run with me. This was not premeditated and I do not remember doing it, but at the time I was existing solely on instinct and my instincts were telling me that she was as much a part of this as I was and I wanted her to be a part of it at the end. Kaitlin peeled off sometime before I crossed the finish line, but she gave me a huge boost that carried me through to the finish. Just as I crossed the finish line, my legs gave out. I barely kept myself from hitting the ground and a Marine helped me to a chair. Then Kaitlin and my friend Derrek helped me hobble to the runner’s village for some much needed hydration and caloric intake. The marathon is a humbling race, but for me it was a great opportunity to learn just how supported I truly am. 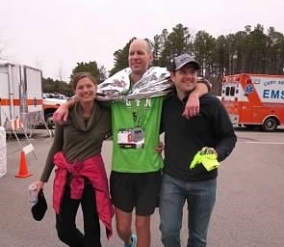 Training for and running my first marathon was a great experience even though I fell short of my goal. I was in awe of the elite runners that were miles ahead of me, and I was proud of the dedicated runners that were soldiering on miles behind me. I will definitely run another marathon, and at some point, I will qualify for Boston. But for now I need some rest, some ice, and a cold Grins.