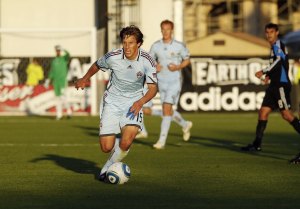 Grins is proud to be the official beverage sponsor of the first-ever Wells Thompson Signature Soccer Camp, which will take place this Friday through Sunday at Forsyth Country Day School in Lewisville, N.C.

The camp is put together by 28-year-old Winston-Salem native Wells Thompson, a former standout on the Wake Forest University soccer team who now plays professionally for MLS’s Colorado Rapids.

He has pulled together an impressive roster of talent with local ties. Former Wake players Austin da Luz, Zach Schilawski, Brian Edwards and Cody Arnoux, all of whom now play professionally, will assist with the camp.

But the camp is about more than just soccer. Thompson sees it as a way to give back, and to use his position as a professional player to be a positive role model for kids, wherever their careers take them.

“I think sometimes kids these days can get lost and feeling like they’re not good enough,” Thompson said. “We want to teach kids that whatever it is you want to be, go after those dreams and go after them with all your heart.”

Thompson plans to donate a portion of the proceeds from the camp to Love, Light and Melody, an arts-based program that seeks to bring healing and hope to communities ravaged by extreme poverty. The nonprofit was founded in 2005 and serves three locations in North and South America.

Thompson said the camp will also include lessons about the importance of helping others, and to help drive those home, he’s asking campers to participate in a donation drive for clothes, shoes and toys, to be hosted at Winston-Salem’s Soccer Unlimited Jan. 9 – 13. Donations will be given to local organizations that can find good homes for them, and the entire community is invited to participate.

Thompson’s goals fit in with Grins’ mission to make people smile, while focusing on the positive, bringing an optimistic message to kids and giving back to the wider community.

Thompson said he likes what Grins is about, and the fact that Grins delivers a healthier option for hydration, along with great taste, makes it a good fit for his camp. Conditioning and nutrition will be part of the weekend, and he hopes to help kids build good habits early.

“It works with the things we are trying to teach kids,” he said.